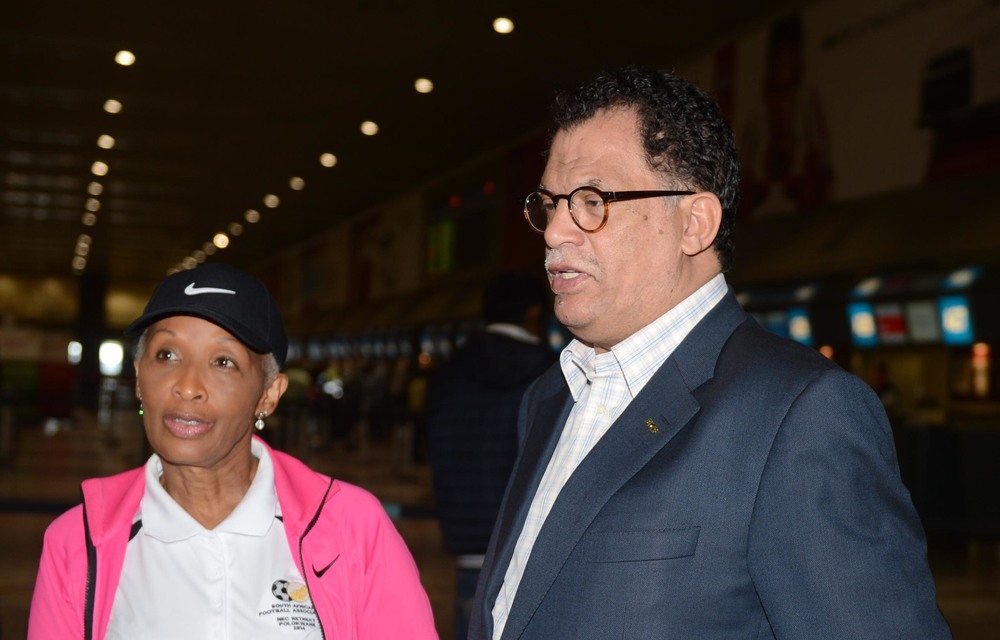 The irony will not be lost on discerning football fans that Ria Ledwaba, who is campaigning to topple Danny Jordaan as president of the South African Football Association (Safa), once backed him. Some followers say the local game’s governing body would be better served being led by someone new, as what difference would Ledwaba make that she couldn’t in almost a decade as a top Safa official?

She has been vice-president and on the national executive committee (NEC) for the past few years, so why has she not used her position to ensure the success she now promises to bring about as Safa president?

“I understand why you’d ask that,” Ledwaba says from deep in the bowels of the FNB Stadium, after the media conference to announce her manifesto as president. “But I’ve tried for years to do just that.”

Earlier, she’d said: “As a reporter, when you have a story, you go to your editor and pitch it. If he turns it down, you don’t go out writing that your story was turned down, do you? It is the same with the Safa NEC. It is an organisational structure where you raise your ideas and when you are defeated, you abide by the decisions taken. But I want to change that structure. We’ve got to get to a point where we realise that the majority is not always right.”

Jordaan is essentially the one-man majority that has defeated Ledwaba, to the extent that she has had to seek legal recourse. The veteran football administrator and former Ria Stars FC owner has sought a postponement ahead of the presidential elections scheduled for 25 June as she strives – among other things – to limit the presidential mandate to two terms, as per “the preamble to the Safa constitution”. Jordaan is standing for a third term.

Ledwaba told the media that she wouldn’t be surprised if she was suspended before the elections, given Safa’s pending case against her. But she remains defiant: “I can never be bullied by anyone. I will not worship anyone, but I will worship the statutes.”

She was referring to being barred from making a public statement before her nomination was ratified. “I can’t just wake up and send out a circular just because I am the president and prohibit a press conference. We need change. We need to move from being a problematic organisation to being a winning nation.”

Ledwaba says she is capable of doing just that for Safa. She listed several issues – from grassroots development and schools football to women’s football, national teams, financial and commercial, supporters, match officials and governance – that she plans to focus on to ensure South Africa wins again. Like most “politicians”, her pitch sounded convincing.

There was a sound plan to get “legends involved in coaching schools soccer”. And her reasoning that the association struggles to attract commercial backing because “sponsors do not sponsor Safa but invest in a leadership in whom they believe” made sense. Then she laid it on thick about the role she played in ensuring that the development of Banyana Banyana players was taken to a higher level by basing them at the High Performance Centre at the University of Pretoria, from which a good number have made it to overseas clubs.

Ironically, it was her stance on Banyana a few years ago that caused many to feel Ledwaba was “one of the boys” at Safa and that for someone who claimed to stand for women’s emancipation, she spoke like the old men running the game. She said then that Banyana players needed to look more feminine and dress differently, on and off the pitch.

She chuckles as I remind her of that. “I remember that some people didn’t take kindly to my views about how Banyana looked. All I was saying was that I’d seen other women soccer players putting on make-up to go on to the pitch and that there’s nothing wrong with that. I felt that we could get the girls the proper feminine kit instead of getting them to wear the men’s kit.

“I was not saying our girls should change who and what they are. All I wanted was for them to feel confident in being women in a so-called men’s game, without feeling like they must act like men. Some girls were being influenced to change because of how they found those inside the team were.

“But that intervention changed the face of Banyana because we began to have new role models like Amanda Dlamini, who influenced the other girls to know that they could look like girls and still play football. But we still allowed the girls to be themselves.”

Ledwaba and the NEC have allowed Jordaan to be. She was among the Safa leaders who remained quiet when Jordaan stood accused of rape. Instead of suggesting that he stand aside as president until the case ended, Ledwaba called for the public and the media to refrain from judging Jordaan and leave that to the courts. So her stance now in going against the man she previously praised for giving women a chance to lead is going against the grain.

She begs to differ. “If Danny is honest, he will tell you that while I’ve never had a conflict with him in the NEC, I used to tell him personally about the things I felt he was making mistakes on. And 99% of the time he agreed with me only to later not act on that. I’ve said to him many times, let’s have pre-discussions where we can advise him prior to meetings.

“But it is not true to suggest that I’ve always been a backer of Danny. One thing I learnt about this association is that you need to put everything down in writing when you communicate, and I have lots of letters that I can share to show that I’ve been calling for all these things that I am promising to do when I become president.”

Her quest is not about toppling Jordaan, she says. “I told the people who nominated me that I didn’t want to stand against that kind of leadership,” which treated her poorly by suspending her as vice-president. “But I have an obligation to not be afraid so that the next generation does not have to fight the same fight that I have fought.”

She insisted that her fight is not against Jordaan. You’ve “gotta have balls” to take on Jordaan, she said. “For me, it is not about challenging Danny. He remains my president. I never considered him when I made my decision to stand.”

Confident of an overthrow

Interestingly, Ledwaba spoke at length about how she attempted to tell Jordaan that she had been asked to stand for the presidency. “I informed him when I was approached. I called him and he responded to my WhatsApp message and said we would have a meeting. I even wrote him a letter informing him that I would be consulting with the country’s political leadership [the ANC, DA and EFF]. After that I called him to ask for a meeting because I wanted to hear his views.”

Ledwaba said Jordaan snapped at her in front of the other NEC members at a meeting to appoint Bafana coach Hugo Broos. “This breaks my heart. I asked him when we were going to have the meeting I’d asked for and he lost it and shouted at me, ‘I am not going to meet with you. You are not a candidate.’ He was banging the table.” She insinuated that this marked the beginning of the drama that preceded her being vetted as a presidential candidate.

Between her suspension fears and pending court case to stall the elections, time will tell if Ledwaba gets to the polls on 25 June. Yet she is in no doubt that should the elections proceed, she will dethrone her one-time ally who has now become a bitter adversary. “I have overwhelming support. That’s why there’s a lot of panic [in the opposition camp],” she said during the press conference.

Later, I asked how she could be so certain of this support, given that Safa had prohibited her from campaigning until she was officially announced as a candidate. “The circular barred us from public pronouncements like press conferences. But I could call and speak to the members, and they are in support of us. They also want change.”

Many support Ledwaba becoming the first woman to preside over Safa and the change she promises to bring about, including football legends Mark Fish, Malombo Lechaba and Brian Baloyi, who were at the press conference. Over the years though, the reality has been that Jordaan’s opponents in Safa elections either end up being thoroughly thrashed – remember Mandla Mazibuko – or don’t make it to the polls, like Ace Ncobo. But it could well be a peculiar case of third time’s the charm with Ledwaba.

This article was first published by New Frame.