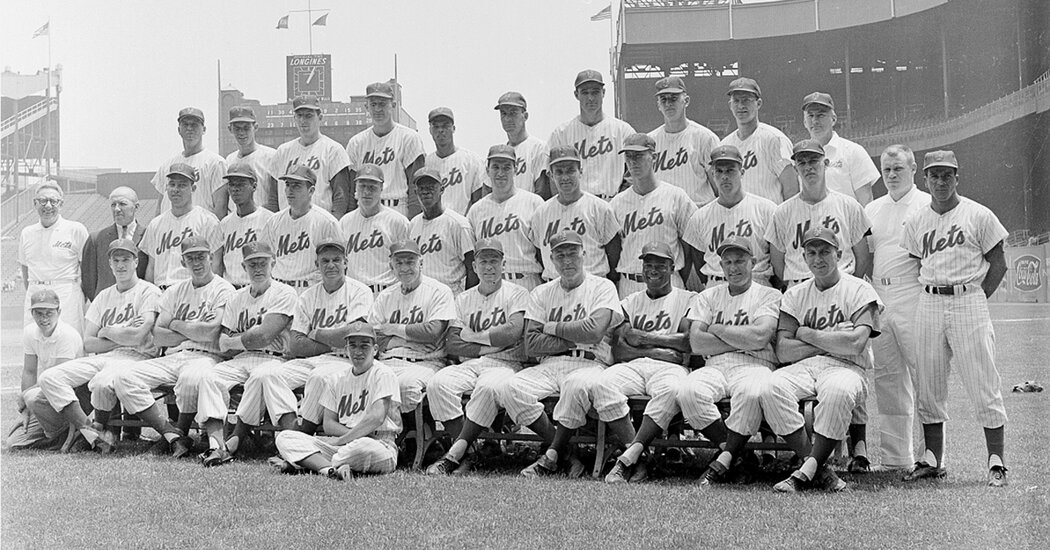 Even with all the terrible things happening around the world, fans of all 30 teams have the annual March diversion of dreaming: free agents who are really worth the money, franchise pitchers who stay healthy, brilliance promise of the latest “phenomenon“ (to speak with Casey Stengel’s vocabulary).

There was a spring when a ready-made fan base, in equal parts bitterness and adoration, saw dreams come true, through the worst team in baseball history: 40 wins, 120 losses. You could look for it.

The defeats came after the Mets were put together in the manic spring of 1962 and supported by a built-in fan base of heartbroken New York National League fans.

On this year-round anniversary – 60 years have passed since that inaugural season – it’s safe to say that an American sports team has never started with an aura like Stengel’s Amazing Mets – banners, vigorous chants and loyalty. of ancient blood, all touched by the Ancient Sailor of a skipper.

The Mets were a welcome addition even before tinkering with their first pop-up, hitting in their first triple play, throwing their first losing home run.

Whatever haunts Mets fans today: Jacob deGrom’s elbow, Jeff McNeil’s underestimation, lack of continuity in the front office; I could go on: The team is supported by a six-decade romance with the bittersweet image of the “same old Mets” or “have you heard of this? “- even when they win.

Some of us can still remember how this all began, when Stengel gathered his pitchers at home base on a funky lakeside driving range in St. Petersburg, Florida in February 1962 and ordered them to run to first base, because that was the essence of baseball.

I was 22, enjoyed covering high school sports for that big Newsday newspaper, on Long Island, and also enjoyed the bunch of New York Florida baseball writers spreading the word about this new team’s ineptitude / lovability. .

In those days, before the ubiquitous presence of teams on social media, radio and TV, newspapers were the main outlet for a new team, and Stengel knew it.

The dispatches caught up with the Mets fandom trying to right a moral wrong: the abdication of the New York Giants and Brooklyn Dodgers in California after the 1957 season.

The blockade of the MLB is coming to an end

Other cities have lost their only team – some have a new one – but New York, New York, has not welcomed the loss of both National League teams.

I was recently comparing the notes with one of my best friends, Steve Jacobson, now retired after half a century, primarily as a sports reporter, with Newsday. He covered part of spring training with the Mets in 1962.

Jacobson recalled his fear, in 1957, that both New York teams would leave the city for California. After college he had been a copyist at the New York Daily Mirror and then joined the Army, based in Fort Bragg, NC.

“I remember going to the barracks and reading the Times, and it said the Dodgers were really moving,” Jacobson recalled. “I threw the paper on the floor and said, ‘Damn, I’ll never see the Dodgers again.'”

Hearts were broken. Willie Mays was on his way to San Francisco. Gil Hodges was on his way to Los Angeles. From 1958 to 1961, sulky Giants and Dodgers fans had to put up with the Yankees gentlemen winning three pennants and two World Series.

Some of us refer to that period as the Middle Ages.

“I was young, I didn’t have any money, but I went to some Yankees games,” admitted Jacobson. “You respected them, but it wasn’t much fun.”

Political pressure and economic reality forced the creation of a new team in New York in 1962. It was to be called the Mets, named after the Metropolitans, a 19th century New York team, and temporarily based in the rusty Polo Grounds. vacated, near the Harlem River.

The first good sign for “us” was the hiring of the Old Man, Stengel, who had won 10 pennants in 12 years for the Yankees and was then “fired” (in his elaborate vocabulary) for the crime of turning 70. .

Jacobson was hired by Newsday to cover the Yankees in 1960, and Jack Mann, the big sports publisher, hired me to follow a few home games that year and several dozen more in 1961, the year of Roger Maris’ 61 homers. . For the National League guys, the wait had begun.

The new Mets leadership wisely hired Stengel prior to the 1961 World Series, which were then played out in God’s sunlight in early October and far more important to the American population than they are today. Stengel was at Yankee Stadium, in the media scrum on the pitch before Game 2, evangelizing the glories of the Amazing Mets.

Stengel was perfectly described in the New York Times by Arthur Daley, the sports columnist, sporting a “green Tyrolean hat” while reciting one of his famous soliloquies in his language known as Stengelese:

«There is Mr. Berra, who uster helps me to manage. … I don’t want to get close to these guys who are now in the other league and Mr. Berra will live to be 110 years old. These were once my players and they gave me some success and no one can say why. “

(To translate: he was saying he would never do anything like wishing Yankees players. However, he would choose “Mr. Berra” as his game coach and lucky charm in 1965.)

The Old Man was there for Cincinnati’s only victory in those World Series, when Elio Chacon of the Reds sprinted home from third base as a pitch passed the catcher. Chacon slipped home in a cloud of stadium dust and blown away, cheered by anti-Yankees fans. I was there, writing a sidebar for Newsday, in an auxiliary press stand, directly behind the Old Man, who took off the aforementioned Tyrolean hat.

(With that one act of hustle and bustle, Chacon earned a spot with the Mets in their first season; Stengel had an affinity for trafficking players. Chacon had a mostly useless season and never played in the major.)

As the team filled its roster of players other clubs didn’t want, Stengel was creating the Mets, an image-building act worthy of a top-tier advertising agency, moving back and forth from his home in Glendale, in California, wherever there was. there were notebooks, cameras and microphones in New York.

He had a smooth monologue on the Amazing Mets, the Metsies and his dream for “the youth of America” ​​because “they haven’t failed yet.”

In January 1962, Stengel materialized in Manhattan to give a lecture with no news. Jacobson reported on Newsday that Stengel had attracted photographers and even Gabe Pressman, the peripatetic radio reporter, away from the “president and mayor” – that is, John F. Kennedy and Robert F. Wagner.

Stengel waved a paper list detailing the scraps and scraps the Mets had amassed – weirdos named Hodges, Ashburn, Bell, Zimmer, Thomas, Labine, Neal – to lure nostalgic National League fans – plus Chacon. , of course, as well as Rod Kanehl, a longtime Yankees farmhand who impressed Stengel by climbing over a fence on a training ground to catch a long volley.

The Elder said he consumes a list every day, brandishing it to writers, fans, and potential ticket buyers.

As he walked away, Stengel spoke words of greeting to the types of media:

“Don’t forget to join the Amazing Mets!” Stengel yelled, adding, “If they have a newspaper merger, grab a glove.”

Most New York newspapers assigned beat writers from the good old days – the Daily News’s Dick Young was one – but The Times took the other route and sent Robert Lipsyte, not far from Columbia University, literate and attentive without fidelity to normal sports writing styles.

On his 50th anniversary at the Mets, Lipsyte described those early camp days, including how he actually took the glove with him and was allowed to fuck with flies on the lakeside pitch. The first fly “exploded in my hand” and “my palm still stings at the memory”. Fortunately, it didn’t seem to hurt his articles, which I eagerly read up north.

The New Yorker sent Roger Angell to see if he could dig something: the start of a career change for the now 100-year-old icon.

We at Newsday assigned Stan Isaacs, who wrote a column titled Out of Left Field, which he surely was, and Jacobson, who started the spring with the Yankees and moved on to the Mets.

“The Mets could finish ahead of the Colts because they rolled out their expansion roster with workers like Frank Thomas and Charlie Neal,” wrote Isaacs, picking the Mets for ninth place in the 10-team National League; Jacobson had them eighth.

“Ah, it was just wishful thinking,” Jacobson said recently. “In the past they had good players who couldn’t take it anymore.” She brightened up and said, “But there was a lot of laughter all the time.”

In St. Louis for the opening game, nearly a dozen Mets got stuck in an elevator at the team’s hotel and, for better or for worse, were saved, in time to lose.

The first home game was two days later, Friday the 13th, of course. I played hooky from high school rhythm to sit in the stands on a bad and sleet afternoon to watch the elderly Mets slip and slide in front of just 12,447 fans. The growing fandom of the Mets survived a streak of nine straight losses before winning one: the same old Mets.

In days to come, Richie Ashburn, old and wise slap hitter, would insist on playing, despite a concussion from hitting the wall. The same old Mets.

The Mets have taken on a former Yankee named Marvin Eugene Throneberry, born to be a Met, irregular on the pitch and on grassroots courses. Ashburn, in the next locker, advised Marvelous Marv to enjoy the fan chants: “Raspberry! Strawberry! We love Throneberry! ” The same old Mets.

“You had things you never had before, like banners, signs and chants like a college football game,” Jacobson recalled. “’Come on Mets!’ It was very noisy. “

Stengel would go out on the pitch and get stronger. People would be on the bench.

New York fans have combined their hatred of the deceased owners of the Dodgers and Giants with their love for the National League football: Roberto Clemente! Enrico Aaron! Franco Robinson! Stan Musial! When Willie Mays and Duke Snider returned home in their gray street uniforms, there were lusty family reunions.

It was a glorious time, and it feels like yesterday. Eventually I watched the Mets games, home and away, as crowds began to flock to this strange early 1960s event in Woodstock-on-Harlem.

With the Yankees, Stengel admitted that he couldn’t have done it without the players.

With the Mets, Stengel could not have done it without the fans.