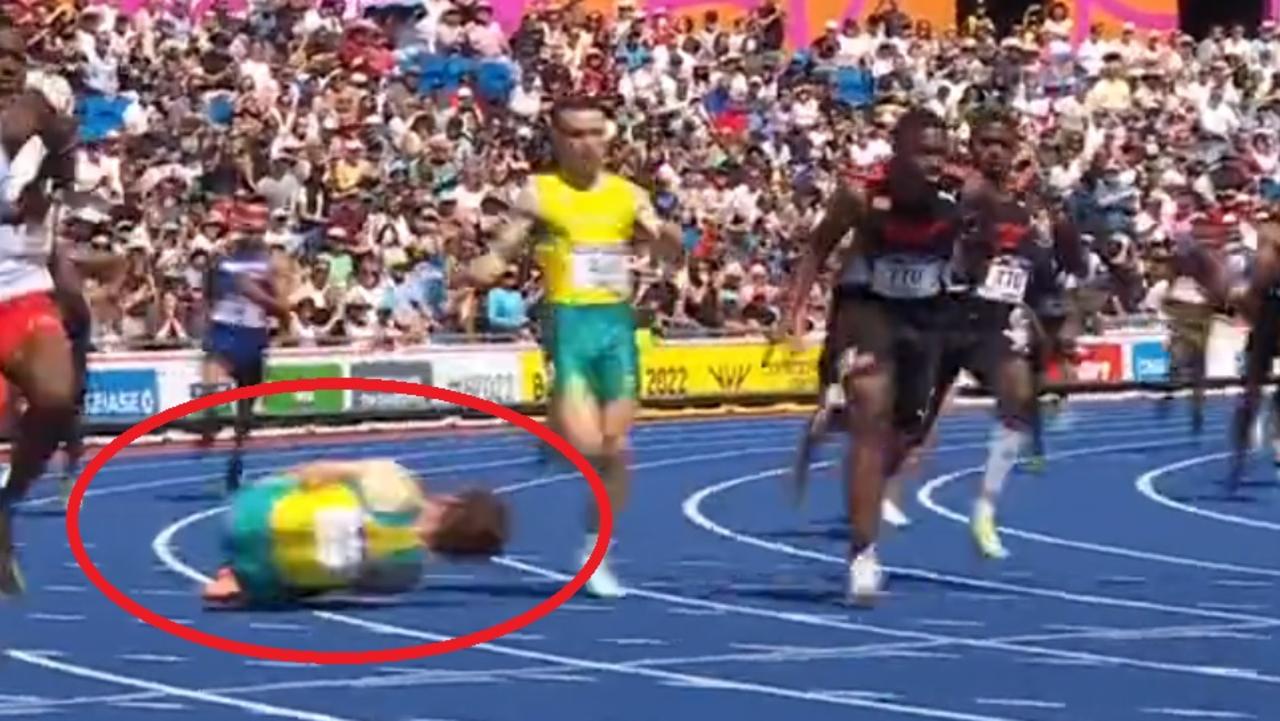 Australia’s sprinting hopes hit the deck on Saturday night when Rohan Browning stumbled in the final exchange of the 4x100m heat.

The Aussies were neck and neck with Trinidad and Tobago as Jack Hale came around the final bend.

But as Hale approached and Browning got up and out of the blocks, he lost his balance and stumbled to the ground, dashing the Aussies’ hopes.

“The last change only has to be clean,” McAvaney started to say before Tamsyn Lewis shrieked in the commentary box as Browning hit the deck.

“A disaster for the Australians.

“I’ve never seen anything quite like it to be truthful.”

“That was awful,” Lewis-Manou added.

“He looks devastated. Rohan would not have been able to do a lot of this training, he would have been focusing on getting his body right. He just really stumbled when he took his acceleration phase.”

Browning wasn’t injured in the fall as he apologised to his teammates immediately after the heat.

“I’m so sorry. I know these boys put in so much work. In my years in athletics, nothing like this has ever happened and, hopefully, it never happens again.

“I just caught my toe and slipped. It has never happened before in training or in races.”

Teammate Jack Hale was quick to console Browning both after the race and in the post-match interviews.

“It’s a relay. There are so many variables and these things happen. It is what it is,” Hale told Channel 7.

Browning finished sixth in the individual 100m final, falling just 0.06 seconds short of a bronze medal at the Alexander Stadium in Birmingham.

It was the closest Australia has got to winning a medal in the men’s blue ribbon event since Matt Shirvington’s lightning time of 10.03 still wasn’t enough for him to get a medal at the 1998 Games.

Australia has never won a medal in the men’s event since the Commonwealth Games changed the distance to 100m in 1970. Now we have to wait at least four more years.

“I’m not happy with it,” Browning said afterwards. “It was just an ugly, painful kind of race and it’s one of those tough nights.

“A month ago there’s no way I saw myself in this final. I try to take each win and race in my stride but once you’re here you just want to be on that podium. That’s what it’s all about.

“I thought about packing it in after worlds and just getting back home and into some training for next year and I am glad I decided to persist. I think one of the lessons I have learned is persistence is so much more important than patience. You have just got to keep trying things and keep at it.

“Today there were a few things I could have done to be up there but I think I was bested today. I need more training in my legs and I need a big winter off-season.”