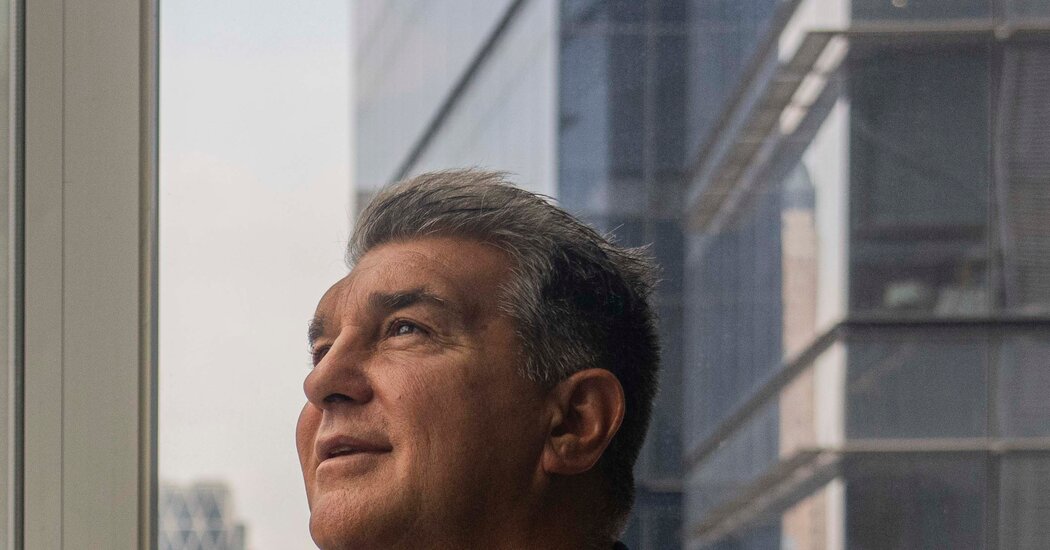 Joan Laporta’s smile was hard to miss. Staring down from a vast digital billboard last month, the grinning image of the president of the Spanish soccer giant F.C. Barcelona covered almost an entire side of the Palms Casino Resort in Las Vegas.

The billboard scrolled through other images — there was one of a handful of Barcelona’s players, and another of its coach, Xavi Hernández — but soon enough it was back to Laporta. And it was that sight, a beaming president front and center in the gambling capital of the world, that was perhaps the best symbolism of the financial mess in which Barcelona currently finds itself, and of the boundless confidence of the man who says he has a plan to fix it.

Barcelona, in true Vegas style, is doubling down.

A team that less than a year ago was unable to meet its huge payroll; a business that, with losses of 487 million euros ($496 million) last year, was described by its own chief executive as “technically bankrupt”; a club that is currently saddled with debt of more than $1.3 billion, has decided the best way out of a crisis caused by financial mistakes, rich salaries and extravagant contracts is to spend its way out.

It has sold off one club asset after another to raise roughly $700 million to help balance its books. Yet it is plowing ahead with a $1.5 billion project, with financing arranged by Goldman Sachs, to renovate and modernize its iconic stadium, Camp Nou, which because of the rush to raise funds will for the first time carry the name of a sponsor. And it has paid out more money on new signings this summer than almost any other major team in Europe, with a new flashy acquisition announced to great fanfare on a seemingly weekly basis.

The freewheeling spending has raised eyebrows among Barcelona’s rivals and concerns among some of its 150,000 members about the club’s financial viability if Laporta’s big bet doesn’t pay off. But the president, in an interview at the Manhattan headquarters of The New York Times, offered repeated reassurances that he knows exactly what he is doing.

“I’m not a gambler,” Laporta declared. “I take calculated risks.”

Risk, however, has become a fixture at Barcelona.

Laporta was elected club president for a second time last year after his predecessor and the previous board were ousted for what amounted to the simultaneous financial and sporting collapse of one of the world’s great sports teams. While many expected Barcelona to rebuild slowly, to live within its means in a period of humbling austerity, Laporta has decided instead to steer Barcelona on a completely different course. He says he has no choice but to try to win every year.

“It is a requirement,” he said.

More than $700 million has been raised by selling pieces of the club’s business. Twenty-five percent of the club’s domestic television rights — for a quarter century — went to an American investment fund. Spotify, the music streaming service, signed a four-year deal to put its name on the Camp Nou and the even more valuable real estate on the front of the team’s jerseys. On Monday, Barcelona announced the sale of a quarter of its production business, Barca Studios, to a blockchain company, Socios. It is in talks to sell part of its licensing business next.

Instead of paying off club debt, however, the money has largely gone toward accumulating new talent: $50 million for the Polish striker Robert Lewandowski, $55 million for the French defender Jules Koundé, almost $65 million for the Brazilian wing Raphinha. Several other players joined as free agents. More reinforcements may be on the way.

To Laporta, signing Lewandowski, who will soon be 34, and the others makes perfect sense. It is part of what he contends will be a “virtuous cycle” in which success on the field will shore up the team’s finances through an increase in revenue. The strategy is a repeat of the recipe he used during his first tenure as president, a seven-year period that started in 2003 and ended with a Barcelona team celebrated as one of the best in soccer history.

“In my time we put the expectations very high and we were successful,” he said of his previous tenure. “And then the Barça fans around the world, around 400 million fans worldwide, they require a level of success.”

But times, and revenues, have changed. The club Laporta inherited in 2003 was mired in a financial crisis, too, with losses of almost double its revenue and mounting debts. But the figures were 10 times smaller back then, and the club had not yet begun the process of transforming itself into the commercial juggernaut it has become.

Those teams also were not required to meet exacting constraints on player spending that have since been enforced by the Spanish league, and it is those rules that pose the most immediate obstacle to Laporta’s revival plan. Because La Liga has insisted it will not ease the rules by a single euro for Barcelona, the club has not yet been able to register any of this summer’s new signings. Wary that the team might not make the deadline, the league has not yet used any of those players, even Lewandowski, the reigning world player of the year, in any of its branding for the new season.

The most recent asset sales should clear the way for Barcelona to meet La Liga’s financial rules and register its battalion of new signings, Laporta insisted. “That’s been a decision that in honesty I didn’t want to do,” he said of the sales, even as they will — at least temporarily — push Barcelona’s balance sheet into profit.

That type of maneuver — a mix of boldness and brinkmanship — is typical of Laporta, who benefits from a cult of personality unmatched by previous presidents during the club’s modern history.

It is why he can put himself on Las Vegas billboards, and why he can continue to advocate publicly for the short-lived and widely reviled European Super League. (Barcelona, Real Madrid and Juventus — three of the 12 teams that signed up for the breakaway concept — are forging ahead with the project, which Laporta said is now being envisioned an open competition that will benefit the biggest teams. He met recently with Andrea Agnelli and Florentino Pérez, his counterparts at Juventus and Real Madrid, in Las Vegas to discuss the next steps.)

But Laporta’s popularity is also why he can get away with financial risks that most likely would have been unacceptable had they been proposed by previous presidents, and particularly his unpopular predecessor, Josep Maria Bartomeu.

“What would happen if Bartomeu did the same as the current president is doing?” said Marc Duch, a club member who helped oust the previous board. “We would all be on fire, pointing at him and trying to fire him.”

Laporta is granted a wider berth, and even backed by fanatical defenders on social media, Duch said, because of his links to the earlier golden era. “There is a success story behind Laporta,” Duch said. “He has a huge fan base: He’s like the Pope, like Kim Jong-un: the supreme leader.”

Laporta’s intensely personal style of leadership has also emerged in other changes at the club. To run for president, Laporta first had to raise a guarantee of 125 million euros, a bond that was established essentially as a protection against mismanagement. But the club’s members recently agreed to rule changes that mean that he no longer has any personal risk, according to Victor Font, a businessman who challenged Laporta for the presidency. Because of that, Font said, Laporta — by borrowing money and selling assets — is risking the club’s future, not his own.

“If things do not work out,” Font said, “we will be hitting a wall.”

Conflict of interest regulations were quietly altered last year, too, ushering an array of Laporta’s friends, former business partners and even family members into executive roles. To Laporta, those changes were essential given the challenge he inherited. “I need to have the people that I trust,” he said. But the circle continues to shrink: A chief executive appointed by Laporta quit within months; instead of replacing him, Laporta took on his duties himself.

At the same time, he has had to rebuild trust with a group of players and persuade many to accept salary cuts, in some cases worth millions of dollars, at the same time the club is splashing eight-figure sums on new talent. Laporta described the players who have accepted pay cuts as “heroes,” and insisted that by reducing its wage bill and offloading some high-earning players the new arrivals would fit within a carefully crafted salary framework. But the business of getting there has not always been pleasant.

One player who has so far refused to accept either a pay cut or a move to a new club is Frenkie de Jong, a 25-year-old Dutch midfielder acquired in the summer of 2019 at the cost of nearly $100 million. De Jong has been the subject of intense speculation all summer as Barcelona has pushed publicly for him to agree to a reduced salary — he had already agreed to defer 17 million euros ($17.3 million) — or accept a move to a new club. (Manchester United reportedly has been the most eager bidder.)

But de Jong has made clear he wants to stay in Spain, and while Laporta declared his “love” for the player, and said he was not for sale, he added that de Jong needed to “help the club” by restructuring his salary. Unions and the Spanish league president have both warned Barcelona against exerting pressure on de Jong, and in response Laporta has said his club will pay de Jong what he is owed. “He has a contract, and we follow the contract,” Laporta said.

Much of Barcelona’s current plight, ironically, can be traced to the era of success it enjoyed during Laporta’s first term. Those teams played a brand of soccer that was unmatched, producing a string of trophies but also a squad of popular superstars commanding ever-increasing salaries. No single player personified that escalation more than Lionel Messi, whose last contract at Barcelona was worth around $132 million per year.

As Barcelona’s debts grew, though, signing Messi to a new contract that would align with La Liga’s financial rules became impossible. Priced out, Messi bade a tearful farewell to Barcelona, joining Qatar-owned Paris St.-Germain as a free agent. Laporta, who had pledged to retain Messi as a presidential candidate, has since wistfully suggested that he would like to bring him back.

“I feel like I have, as the president, a moral debt to him in order to give him the best moment of his career, or give him a better moment, for the end of his career,” Laporta said, offering no explanation for how that might be done.

The relationship, meanwhile, has frayed: Laporta, in perpetual campaign mode, continues to suggest he will try to bring Messi home. Messi has previously expressed his frustration at how Laporta characterized his exit, and his father reportedly has asked the Barcelona president to stop speaking about his son in public.

Discussion of how to resolve that situation, though, can come later. The same is true for difficult questions about where Barcelona will continue to find ever-increasing revenue streams in a post-pandemic economy, or about what it will do if it can’t register all of its signings, or what happens next year, or the year after that, when the nine-figure bill comes due.

Laporta is living in the present. “Winning,” he said, “is a universal human motivation.”

But now he is out of time. Laporta politely ends the interview, saying he has to rush off. He has appointment at Goldman Sachs, to discuss a new financing arrangement.