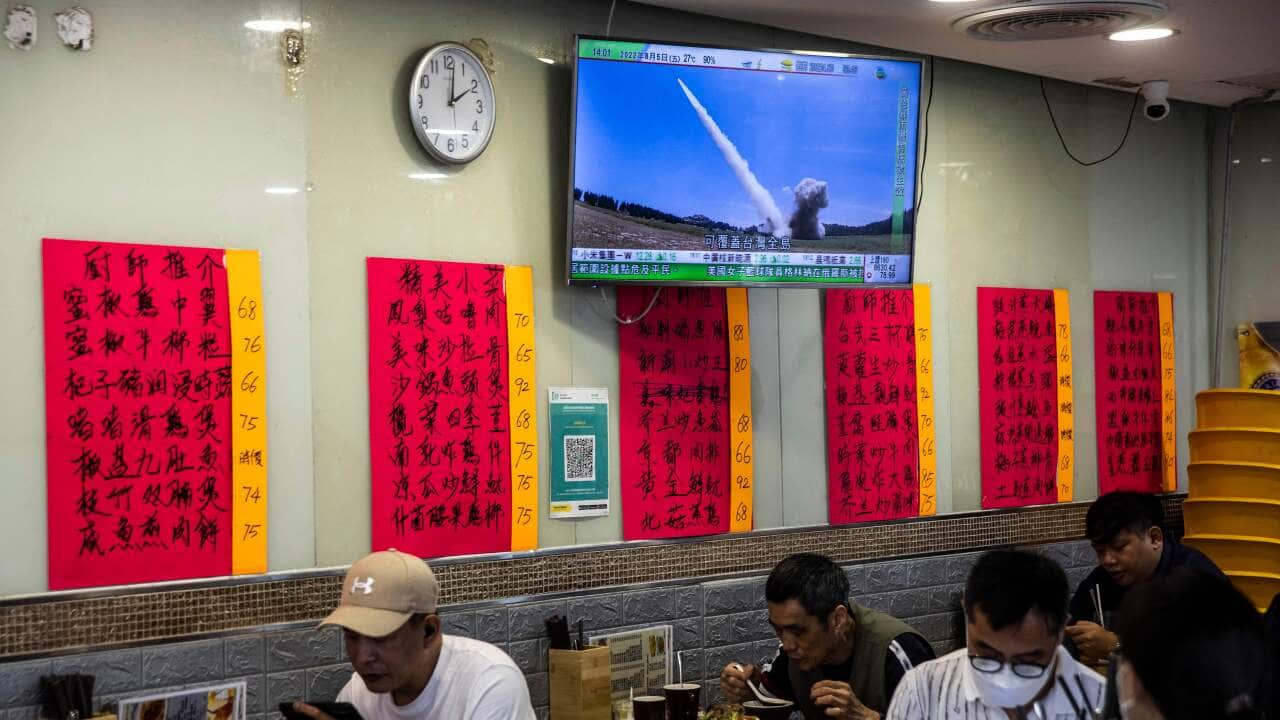 Taiwan accused the Chinese army of simulating an attack on its main island on Saturday, as Beijing doubled down on its retaliation for US House Speaker Nancy Pelosi’s visit to Taipei after announcing a suspension of cooperation with Washington on key issues.
Relations between the two superpowers have nosedived in the wake of Ms Pelosi’s trip to self-governed Taiwan – which China claims as its territory – prompting calls from the UN for urgent de-escalation of tensions.

And Friday saw the environment become the latest victim of the geopolitical jousting, as Beiing said it would withdraw from a series of talks and cooperation agreements with Washington – most notably on climate change and defence cooperation.

The world’s two largest polluters had pledged to work together to accelerate climate action this decade and vowed to meet regularly to tackle the crisis — a deal that now looks shaky.
Beijing on Saturday continued some of its largest-ever military drills around Taiwan — exercises aimed at practising a blockade and ultimate invasion of the self-governing island, analysts say.

Taipei said it observed “multiple” Chinese planes and ships operating in the Taiwan Strait, believing them to be simulating an attack on the self-ruled democracy’s main island.

“Multiple batches of Communist planes and ships conducting activities around the Taiwan Strait, some of which crossed the median line,” its defence ministry said in a statement, referring to a demarcation line that runs down the Taiwan Strait which Beijing does not recognise.
Australia’s Foreign Minister Penny Wong warned China’s decision to fire high-powered missiles into waters around Taiwan’s coastline is “a serious matter for the region”, calling for “restraint and de-escalation”.

The Chinese government is yet to formally confirm whether missiles overflew the islands during the drills, while Taipei has refused to confirm or deny the flight paths, citing intelligence concerns.
But Japan’s defence ministry said of the nine missiles it had detected, four were “believed to have flown over Taiwan’s main island”.

He added that they passed through an airspace where Patriot missiles – a highly mobile surface-to-air missile system that would be a crucial defence against Chinese warplanes – are densely deployed.
The latest drills also represented the PLA’s closest-ever exercises to the island, its first encirclement and the first time it set up a shooting range east of Taiwan, Professor Meng said.
China’s official Xinhua news agency reported that the military “flew more than 100 warplanes including fighters and bombers” during the exercises, as well as “over 10 destroyers and frigates.”

The latest drills are expected to continue until midday Sunday and have sparked outrage from Australia, the United States, Japan and the European Union, as well as Taipei.

“Australia is deeply concerned about the launch of ballistic missiles by China into waters around Taiwan’s coastline,” Ms Wong said in a statement on Friday.
“These exercises are disproportionate and destabilising.”
Ms Wong’s statement also singled out Australia’s close strategic partner, Japan, while warning about the risk of accidental conflict in the region due to “miscalculation”.

“This is a serious matter for the region, including for our close strategic partner, Japan,” it said.

“Australia shares the region’s concerns about this escalating military activity, especially the risks of miscalculation. We urge restraint and de-escalation.”

Acting Prime Minister and Defence Minister Richard Marles said China’s missile launch near Taiwan was a breech of United Nations rules that require countries to ensure peace and security in international waters.
“The UN Convention on the Law of the Sea is a completely understood treaty and an accepted part of the architecture of the global rules-based order,” he said.
“How it applies to the Taiwan Strait is also clear. And it does apply to the Taiwan Strait.”
White House spokesman John Kirby called it an overreaction by China and a “pretext” to increase military activity around the Taiwan Strait.
China defends the drills as just countermeasures in the face of provocations by the US and its allies in Taiwan.

A joint statement condemning China’s actions was also issued by the Japanese, US and Australian foreign ministers after meeting at the Association of Southeast Asian Nations (ASEAN) summit in Phnom Penh on Friday.

The statement said the three leaders have shared interests and values including “a commitment to freedom, rule of law, human rights, sovereignty and territorial integrity, peaceful settlement of disputes without resorting to threat or use of force, and freedom of navigation and overflight”.
Ms Wong said she expressed Australia’s concerns to Chinese Foreign Minister, Wang Yi, along with other foreign ministers from the region while attending the ASEAN summit.
Department of Foreign Affairs officials have also reiterated Australia’s concerns with the Chinese government, she said.
China has become an increasing diplomatic concern for Australia, following trade tensions and bans on Australian products, and the recent .

Ms Wong has made shoring up Australia’s influence in the Pacific one of her top priorities since Labor’s election win in May.