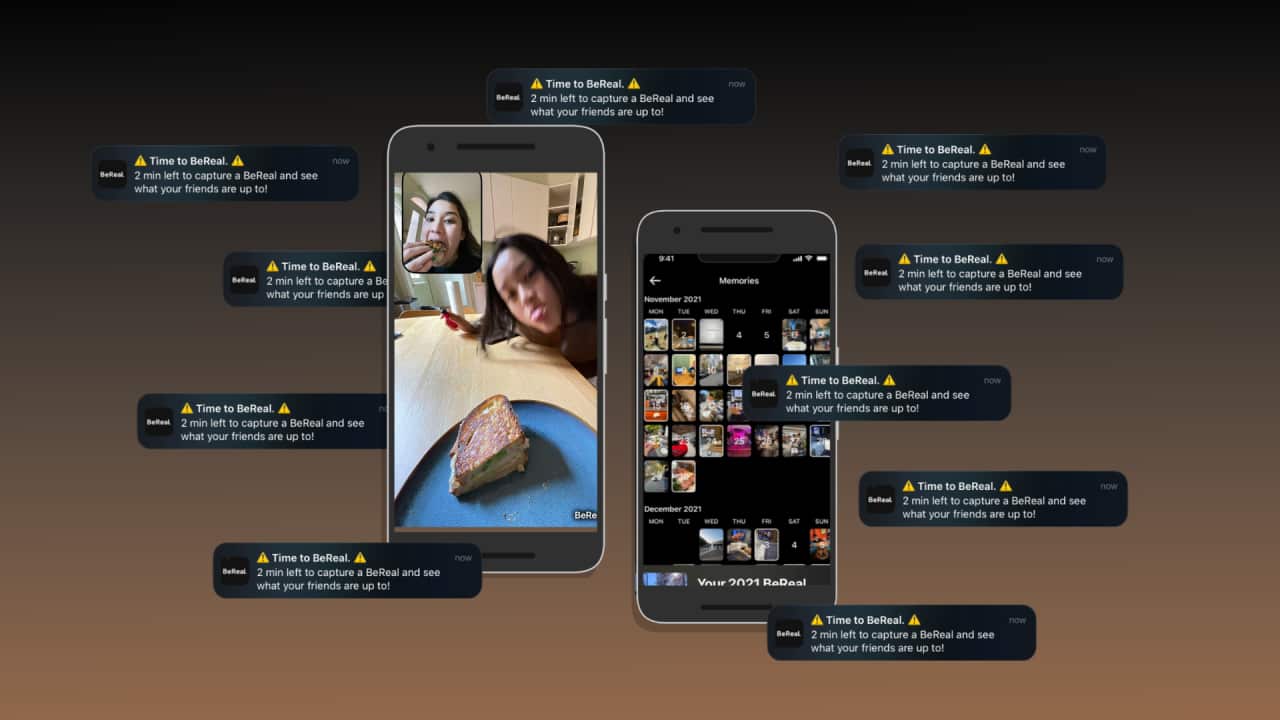 Your friends “for real” is the app’s promise.
Once a day, you’re pinged with a notification giving you two minutes to “be real” and take a photo of what you’re up to. The other day a girl had to “be real” at her grandfather’s funeral. She later shared the experience on TikTok.

It also gives you a chance to see what your friends are doing, and only once you’ve posted your own candid photo can you unlock theirs. To an extent, it stifles at least some of the pressure to stage or curate your online life.

There are other obstacles designed to maximise the possibility of authenticity on the app, too.
You’re advised not to retake a photo – and if you do, it shares with your friends how many careful attempts it took. If you take an image late, it’s labelled accordingly.
The shot captures a picture from both the front and back camera so that you see what is being framed as well as what’s behind the camera.
There are no likes, no profiles, no follower count and definitely no filters on BeReal.
The app also relies on the unspoken shame of being the user who takes the ‘relaxed’ platform too seriously.

Posting five hours late while you’re out doing something fun would be an atrocity, for example.

BeReal: Currently one of the most downloaded apps in Australia

Despite – or because of – the stark differences between BeReal and other social media, the app has become increasingly popular. Currently, the French-founded platform, which launched in 2019, is the most downloaded app on Australia’s Apple App Store.
For 25-year-old student Emma Hilton, the app validates the lulls of life and the big portions of time spent performing tedious yet normal tasks.

“Often I’m just in bed whenever it goes off, and I guess that’s half the beauty of it,” Emma told The Feed.

Emma Hilton has been using ‘BeReal’ for a month and says the “low-stakes” app gives her authentic glimpses into the lives of her friends. Credit: Supplied

“You go your whole day doing really fun things and being outside, and then you lay down to scroll on TikTok and that’s when it goes off,” she added, laughing.

Emma, who has been using the app for about a month, admits to delaying the occasional snap, particularly times that align with bathroom visits.
“I’m sure the few people I have would really appreciate it if I wasn’t being real right now,” she said.

“Occasionally, if I’ve been in bed too much, I’ll wait until I’m making dinner but it’s never anything too interesting.”

Its intimacy is part of the charm for Emma. On the app, it’s only her and about 10 close friends. She believes it’s why it works.
“Instagram posts are very much the highlights of your life. And it’s so contrived, regardless of how you use it because you want people to have a certain perception of you,” she said. “I like how mundane it [BeReal] is.”
The lack of endless scrolling is also a selling point.

“It’s low effort and occupies a very small part of my brain and day. You kind of dip in and dip out,” Emma said.

Can it stand the test of time?

Tama Leaver, a Professor of Internet Studies at Perth’s Curtin University who researches social media, is a firm disbeliever. He said the app’s premise and novelty won’t last.

“Authenticity is the great myth of social media, nothing on social media is authentic,” Mr Leaver told The Feed.

“Social media is framed and performative, this just does it in a different way.”
Jo Price, who has been on the app a little longer than Emma, joined in April, said she’s strayed from the app’s initial mission statement.
“I don’t use it very authentically and will postpone adding a photo until something interesting is happening,” the 37-year-old told The Feed in a message.

“I appreciate that people treat it more like a photo-a-day challenge because it would be very boring to look at otherwise.”

What does human nature tell us?

Ash King, a psychologist and researcher with the cyberpsychology research group at the University of Sydney, said while the app makes clear efforts to achieve its goal, it’s still a social media platform where users only reveal what they want others to see.
She said the ability to accrue followers means users will consciously or unconsciously start curating what they are posting.

On Twitter, one user of BeReal foreshadowed the sentiment: “Do you ever see the BeReal notification and ignore it because it’s overwhelming?”
There is one silver lining, Ms King adds.

“But one upshot of the app is that it might prompt people to consider how it is they are spending their time … If you’re concerned about the substance of your BeReal ‘Memories’ perhaps that’s a call to re-evaluate how you’d prefer your life to look?”

Mr Leaver said most other established social media platforms are “beginning to feel bloated,” as they pinch from one another and try to compete with the other offerings. He said the simplicity of BeReal is, for now, refreshing.
At the moment, he says the app poses no more privacy or security concerns than others, and said users were savvy enough to know the risks of disclosing where they are at any given time.
But one of the big “ifs” which could determine its longevity is how it plans to make money. Mr Leaver suspects it is following the common business model of attracting users before monetising the platform with ads.

“The only way that it will continue to be relevant is to slowly build the sort of tools that every other platform has,” he said.

Tim Hill, a user of the app since June and a social media analytics app founder by trade, said the founders need to be comfortable with not being number one if they want to stay true to its cause. Otherwise, it will wander into the space of its competitors and lose its core message.

“They need to be satisfied in the niche and know they’ll never be a mass-adopted app. I think that’s probably a pathway to really solid usage and a way not to piss people off over time.”