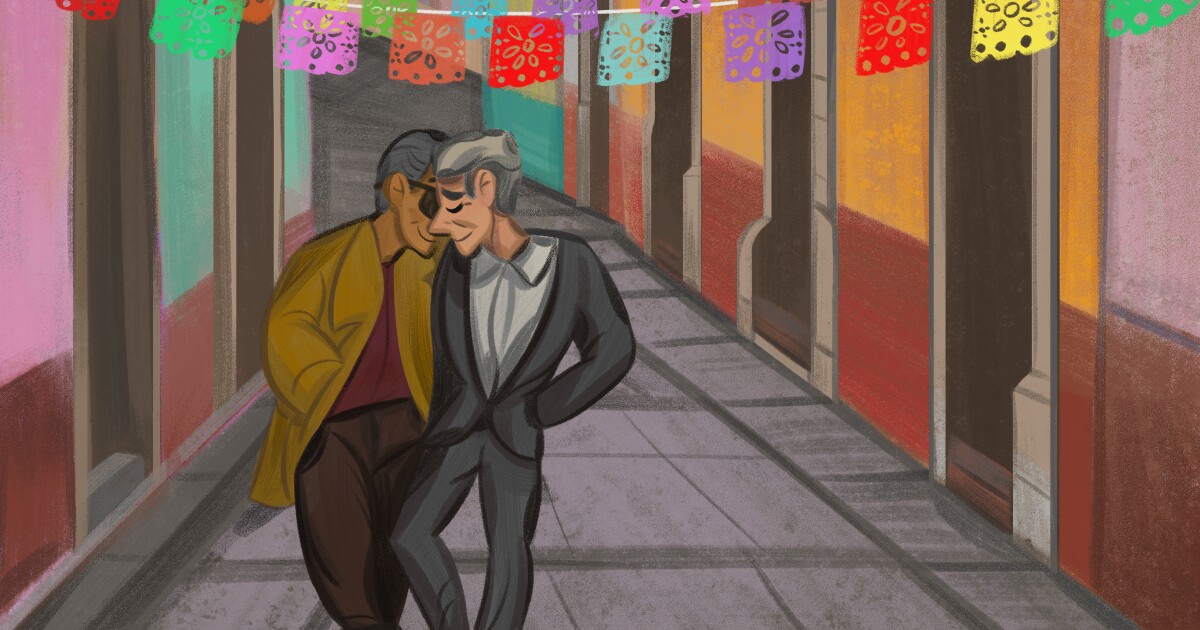 I met Ruben in 2012 in a yoga class on Larchmont Boulevard for people with HIV. I’d greet him, “¡Hola! ¿Cómo estás?” He was Mexican. I always spoke first because he couldn’t see. He had become blind years before. His friend David usually drove him to class. Then I didn’t see Ruben anymore. David had died during surgery. Another classmate asked if I could bring Ruben to yoga.

Seeing him twice weekly for class meant that as we drove together, and as I assisted him on the street with his cane, I grew to feel protective and loving toward him. We started an affair. When I first entered his West Hollywood apartment, I was astounded by the amount and quality of the artwork, mostly ceramic masks, that he had produced in his Braille Institute courses. I curated his one-man exhibition at the Workers Circle on South Robertson Boulevard, where he earned enough to purchase an iPhone. He also exhibited prints from his Braille classes and some paintings from before he went blind.

Ruben had been in the U.S. since about 1989 but remained undocumented. Only much later did I learn that Ruben was an assumed name. He was legally Juan José. He always just failed to meet the amnesty guidelines, and although we consulted lawyers about his immigration status, they could offer little hope.

We never lived together. At most, Ruben would stay with me one or two nights a week at my house in Palms. We were somewhere in between friends with benefits and committed lovers. Neither of us ever considered marriage.

Ruben lived with a former boyfriend. After the Trump election, the plan was made for Ruben to “self-deport” before getting into any trouble with the government. On Thanksgiving 2017, they packed a car and drove to El Paso, Texas. “To love that well which thou must leave ere long,” says the Bard.

Family members from Zacatecas picked Ruben up, never having expected to see him in Mexico again. He started living with his brother in a house they had co-inherited from their father in the middle of a long staircase street with about 50 irregular steps each way. Ruben’s mobility was severely compromised.

Ruben and I spoke by phone daily, and our relationship deepened. I figured I’d visit him in Mexico whenever I could, and we’d enjoy whatever time we could spend together.

My first trip to Zacatecas was in late 2018, after he’d been there a year. After two weeks, I could see how impoverished his life had become as a blind man with HIV, bereft of his friends, as well as of his artistic, his sight-impaired and his gay communities. His family welcomed him back but had little clue how to help him gain the independence he so cherished. They overprotected him, and he became more and more a tolerated appendage to a large extended clan without his wide-ranging cultural interests. No one had ever shown him, for example, how to negotiate the stairway from his home so that he could descend on his own and hail a taxi. That was one thing I did with him on that trip.

To my surprise, before I returned home, Ruben asked me to marry him. I always felt happy with him and I loved him, but I needed to mull it over for a few weeks. In my 70s, I recognized that I wanted him with me to grow old together, and marriage would give us the standing to appeal for his return. Only I could do that. I hired an immigration lawyer to guide us over the hurdles.

And so it was that we were the first gay couple to marry under the new policy in Zacatecas on May 23, 2019. We hired a 14-piece mariachi band — more people than attended the wedding! My two sisters, my brother and his wife came to Zacatecas for four days of vacation and a wedding. I was 74, Ruben was 66. It was truly the happiest day of my life. I visited him again before the end of the year, and we celebrated my 75th birthday together.

Then came COVID-19, and I was unable to return until the summer of 2021, a year and a half later. In the meantime, despite his caution, he caught the virus in early 2021, and it was a severe case. His sister, a physician, took excellent care of him in her home, and he pulled through. When I saw him over the summer, he seemed back to normal, though there were signs I should have picked up that he had lost some of his old mental acuity.

I’d never visited Oaxaca before, so we booked a five-day trip there, which remains among my most precious memories. When we first entered our hotel room, I oriented him to its layout — our bed, the other bed we could spread our clothes on, the armoire, the bathroom entrance two steps from the foot of the bed. Strangely, one day, he stood at the door and couldn’t find his way into the room — the brain fog I didn’t recognize. It would be the last time I saw him, though we still spoke by phone each day. He had insisted I take an erotic mask of his back home, clearly — presciently — wanting it out of Mexico.

In November, his family came to the rescue again. Now Ruben had pneumonia, and once more his sister took charge. We spoke Nov. 8, and he sounded awful. I cried that Monday night. On Tuesday, I told him I’d cried, but he sounded better and said I was being overly dramatic. His sister called me at 12:30 p.m. on Wednesday to say Juan José — Ruben — had closed his eyes for a nap, and died. His lungs had been too badly scarred by COVID to resist this new assault.

The author is cultural editor for peoplesworld.org, a biographer and a translator. He can be found on Facebook at facebook.com/eric.a.gordon.585.

L.A. Affairs chronicles the search for romantic love in all its glorious expressions in the L.A. area, and we want to hear your true story. We pay $300 for a published essay. Email LAAffairs@latimes.com. You can find submission guidelines here. You can find past columns here.