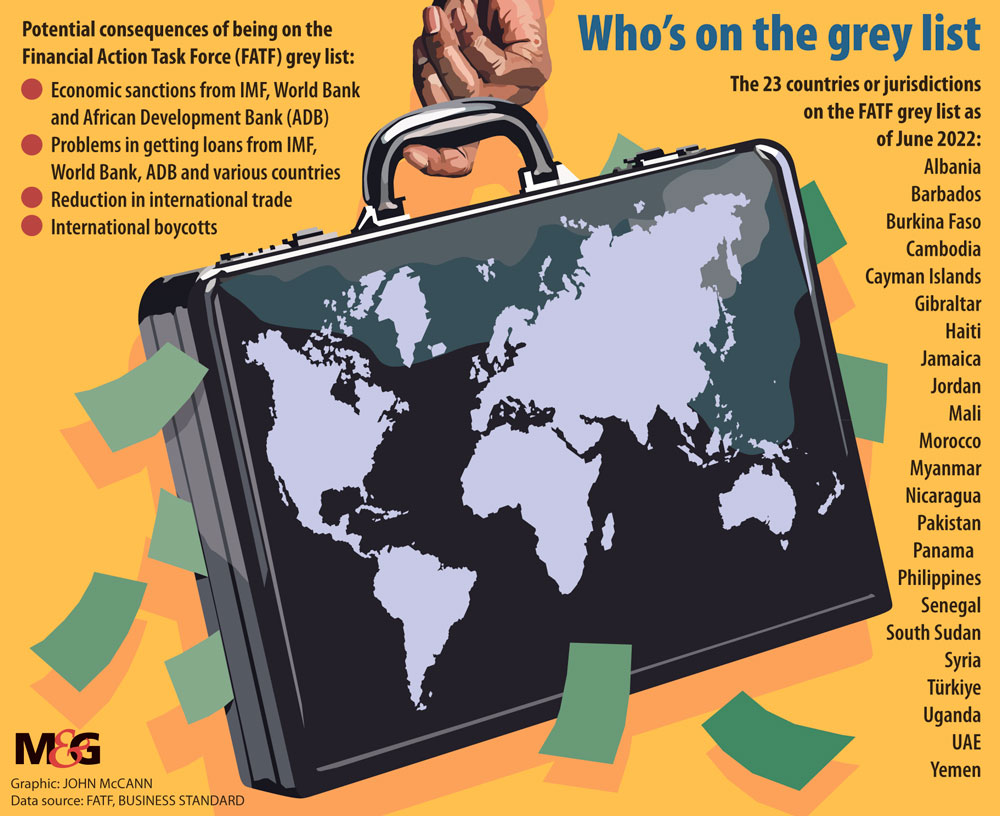 Later this month, parliament will hold public hearings on various amendments to the Financial Intelligence Centre Act (Fica), bringing the country one step closer towards avoiding the feared “greylisting”.

The amendments, needed to ensure that South Africa meets international anti-money laundering standards, were the subject of a panicked meeting of parliament’s finance standing committee in June.

At the June meeting, acting treasury director general Ismail Momoniat explained that his department and the Financial Intelligence Centre (FIC) are very worried about the prospect of South Africa being put on the grey list. “Given the greylisting that we face, the sooner we do things, the better,” he said.

One expert who spoke to the Mail & Guardian about the possible greylisting confirmed what some, including the treasury, seem to fear: South Africa faces an upward battle in its efforts to escape censure by global money laundering watchdog the Financial Action Task Force (FATF).

Last October, the FATF published an evaluation of South Africa’s anti-money laundering measures, which found holes in the country’s policies and efforts to combat money laudering and terrorist financing, despite its financial system being highly vulnerable to these crimes.

In the wake of this, the treasury and the Financial Intelligence Centre have started reviewing South Africa’s anti-money laundering and counter-terrorist financing legislation. The amendments to Fica will widen its scope by including more categories of institutions and businesses that must report suspicious transactions.

South Africa’s largest banks, which facilitate trillions of rands in international fund transfers, are at a high risk of being used for illicit financial flows.

This risk was laid bare in a recent report by the Prudential Authority, which found that one of the country’s largest banks indicated that it had 8 388 clients with unknown citizenship. One bank indicated it had 1 782 clients without a known country of incorporation.

In June, Momoniat conceded that South Africa’s authorities have been “laggards” when it comes to fighting financial crimes. “Our anti-money laundering system is really well behind international standards in its scope … Other countries have moved on, a long time ago.”

South Africa must address all the weak spots identified by the FATF by October 2022 — two months from now. Failing to do so will land it on the dreaded grey list, which Momoniat explained could have dire consequences for the country.

Landing on the grey list will be detrimental to the integrity of South Africa’s banking system and jeopardise the country’s relationships with overseas banks. Regulators in some of South Africa’s main trading partners, such as the United States, the United Kingdom, China and Japan, may restrict their banks from transacting with the country’s banks.

In addition, bribery, fraud, corruption, cybercrime, tax evasion, illegal investment schemes and other related crimes may have a detrimental effect on the integrity of the banking sector and the South African economy as a whole.

“I think we have pointed out that we have to do all it takes to prevent greylisting,” Momoniat said.

“And I think we have been working very hard behind the scenes with all the regulators. It is not just regulators, it is the agencies as well, like the NPA [National Prosecuting Authority], the Hawks. All of them will have to play a part to make sure that we take some of the recommended steps to address the weaknesses which the mutual evaluation report found.”

He noted that it will be very hard and “a bit of a miracle to escape greylisting”.

Olwethu Majola, an attorney who specialises in financial crime mitigation, said South Africa’s legal and policy frameworks for fighting money laundering are robust. Where the country’s authorities and banks fall short, however, is in implementation.

“South Africa wasn’t really looking at the scale and the vulnerabilities related to financial crimes, as well as the channels through which these monies are moving around … But I think the major issue is state capture and the fact that little has been done to hold people to account,” Majola said.

“It is a combination of issues, but they basically boil down to implementation. Our framework is good. Our legislation is there. But they are not being used. This means that anyone now who brings money into the country is at risk of being exposed to all of these issues.”

Like Momoniat, Majola was wary about how much of a push South Africa will need to avoid greylisting.

“If we do not work on these issues, there is a good chance we will end up there, particularly because there are a lot of players involved. It is the state and what they need to do. It is financial institutions and what they need to do … So I think it’s not looking good. And I don’t think we can say, ‘Oh it’s just a threat and it might not happen.’ I think we are very much headed in that direction.”